my adventures with my sewing machine

So, for my Birthday (not really but kinda) Greg and I got a sewing machine. I've wanted one for a while and my mom always gives me birthday money with a note enclosed that says "for your sewing machine". Well, we bit the bullet and bought a sewing machine at Joann's. Knowing the Husqvarna/Viking is a good company we bought the Emerald 118 on sale and got the floor model. Well, the first day I got frustrated with it because I couldn't get the stupid bobbin to thread correctly. I think I have since figured out what I was doing wrong.

So, the machine pissed me off. I left it for a while. Came home from work on day to find GREG at the sewing machine! Yes, my husband sews! I can admit and loudly and proudly! LOL He has made shorts out of a few pairs of his jeans that the knees ripped out in. I still can't figure out why he doesn't like jeans with holes in the knees- I love mine! Greg has a SUPER old leather jacket that he was using for his motorcycle jacket. Well, the zipper in it got all jacked-up and he gave it to Jess to fix. She didn't get around to it so he got it back on Easter and put in his own zipper. Have I already said how proud I am of him? Anyway, up until yesterday he was the only one who had done any real sewing on MY machine.

Now, Jessica makes some GORGEOUS bags and stuff so I was kinda inspired by her to make something. Anything- I just wanted to play with my machine! Well, I was watching "uncommon threads" on my DVR last weekend and they did a thing where someone made a bag out of a patchwork called a crazy quilt pattern. Basically I took that idea and made my own idea for a bag. It brewed for a few days until I figured out that I would use quilters fat quarters and make it a reversible bag. No pattern. Just gonna make it. So, I went to Beverly's and found some really pretty quarters (had to pick up some thread for Greg to work on his jeans shorts with). THEN, realizing how thin the fabric is and how flimsy the bags would be I went to Joann (of course I had to go there for *something* else!) and got some thread and pellon iron on. AND I found some REALLY cute BRIGHT fabrics to make bags out of. At this point I was a bit scared that my bag idea would be an epic failure but I was going to try it anyway. I mean, now I had stuff to make FOUR bags with! OMG!!!! I was starting to get a bit scared.

Well, on Thursday this past week, I had my fabric at school showing it to another teacher and one of my girls was in the room packing up her stuff for lunch while I was showing it to her. Apparently this student of mine sews. She asked me what I was going to make with it. When I told her I was going to make a bag without a pattern. She looked right at me and said, "Oh- well, good luck with that- I think it might be a disaster." I told her I'd bring whatever it is it turns out as to work with me on Monday to show her- good or bad.

Friday, after I got home from school, I set out to brave the machine (that I had not used up to this point to do anything other than random stitches on cut off jean leg scrap) that was intimidating me. I washed and dried and ironed all 8 pieces of fabric I had bought. Then- I cut 2 pieces of the fabric into 3 matching parts- 2 straps, 1 bag piece. I ironed on the pellon to all the pieces. I stitched the bag part and even made the corners squared/triangled (whatever it's called to make a box so the bag can stand up on it's own). I sewed the straps with one fabric on one side and the other on the other side. Turning those straps SUCKED! They were super thick and stiff from the pellon. Then I top stitched the straps to keep them flat (yep, I do know SOME things about sewing from watching TV). I put one bag inside the other and then put the staps in and pinned it all together and top stitched around the top edge of the bag and it was done! Yep, I made my first reversible bag! AND it didn't look too horrible. I wasn't happy with the straps- they were too thick. BUT I had braved the machine and made something finally! 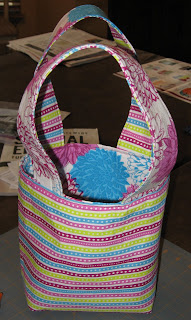 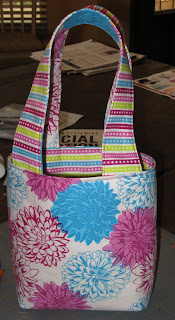 Then this morning I did more thinking and realized that I didn't need to put pellon in the straps and I could make them a bit thinner. So, I made another one today. I LOVE this bag! Think I might have to make it my purse or something. It's tooo cute! 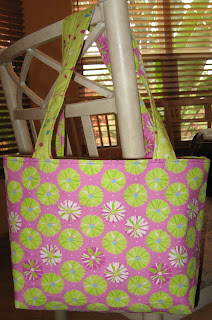 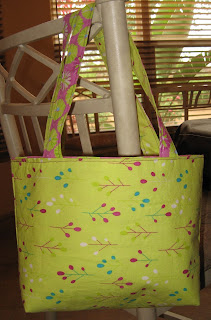 So, now I'm out of pellon and need to get more but we're not going to "town" until tomorrow. UGH! I'm feelin' all crafty and stuff and don't have anything to be crafty with. ARGH!!!! :) Oh yeah- did I forget to mention that they're REVERSIBLE???? I might have found a new addiction (it's actually cheaper than scrapbooking!) and will be probably selling these on my etsy before long because I don't need millions of bags!
Posted By Seaexplore at 2:13 PM

You are quite the crafter!!! Love the bags!

You should be pawning those on the streets of NYC for some mucho dinero !!

I love those bags they are soo pretty!