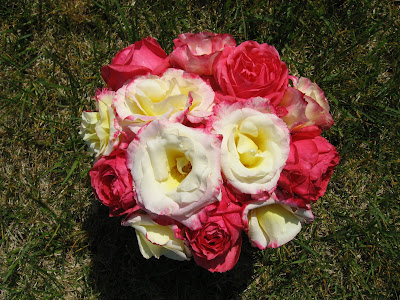 I have had this fabric sitting around for almost 6 months. I bought it intending to make a skirt. It was the end of a bolt so it was cheap, no clue what I paid for it, I tend to throw my receipts away to destroy the evidence of my spending. LOL

So, I wanted to sew today. I wanted to make something. I fixed my favorite pair of pirate patchwork shorts that had a hole in them. I made a hole in one of my favorite skirts trying to repair an invisible zipper (I'm gonna give it to Jess and see if she'll fix the zipper, I'll fix the hole) and put it back in the mending bin. I finished Greg's pot holders. I tried to make the neck trim on my shirt I started, gave up because it wouldn't do what I wanted it to. THEN I began the search for a skirt tutorial. I wanted to make a wrap around skirt. I needed a decent and easy to follow tutorial. Well, I found one here and it was very easy to follow. Here's the results: 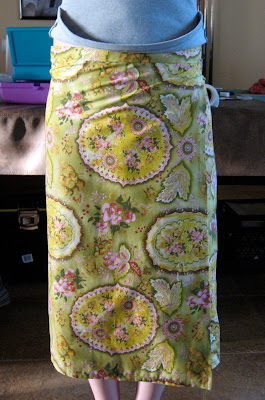 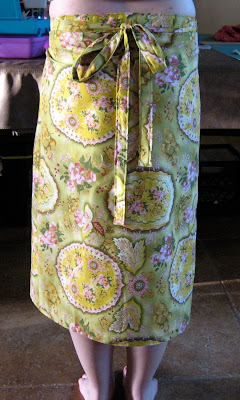 I made some modifications. I used a 1/2" seam, I did 1/2" fold over and iron and then a 3/4" fold over and iron (sneaked some stitch witchery in to help keep it so I could sew) for the hem and the side edges. For the ties/top, I made a 2" bias tape with my bias tape maker and then folded it in half to make a double tape. I then put in a button hole so the tie could go thru to hold it all together. I made the ties/top 104" long since it was part of the edging on the top. I probably should have made the ties not equal length because if I tie it on the side I have one that's REALLY long and one that's shorter. But whatever. It's my first time! I think I'll try to wear it when/if it finally warms up around here! Thanks for checking out my project! Leave me some love if you want! :)
Posted By Seaexplore at 7:09 PM No comments: