the things that make life easier

So, I have been making bags for a while. I love making them but I DETEST ironing the handles. Well, a fellow blogger Karin @ A Window Into Whimsy gave me a FABULOUS suggestion to get a bias tape maker. I had never heard of such a thing so I looked into it. There were people who made their own and I thought about trying this but didn't really want to even deal with having to measure it just right. So.... off I went in search of one I could purchase. I just happened to be at my Aunt's house and she's a big time quilter so I asked her if she had ever heard of one. Well, she went up to her sewing area and came down with one I could borrow. I played with it a bit and decided I needed to get one for myself. I planned to get a 1" one for making purse handles. THEN I remembered that somewhere I had a pair of jeans that was a bit too short in the length and I thought it would be a great idea to cut them into capri's and put some of my brand new bias tape around the hem. Well, 1/2 inch (1" folded over) wouldn't be large enough of a border so I also had to find the 2" version. I went to Joann's- they had the Dritz brand so I bought it. BUT after having researched a bit online I knew that there was a Clover brand one out there somewhere. So, I went to a different craft store, Beverly's, and found not just the 1" but also the 2" and all the smaller ones as well- I think there's a 1/2" , a 3/8" and a 1/4". I only have the larger 2. I don't anticipate on needing the smaller ones, if I do I know Bev's has them tho! So, I bought my bias tape makers and came home to use them. I was unable to find my jeans BUT I have made several bag handles with them and they come out BEAUTIFULLY! 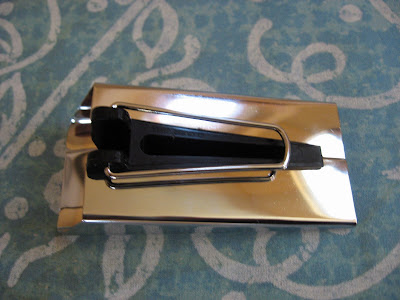 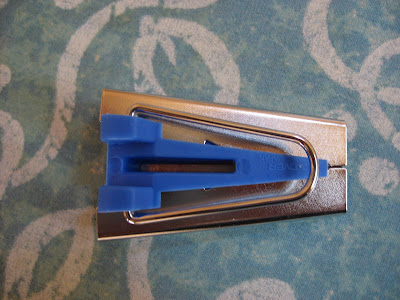 my purse I made with the 2" tape maker 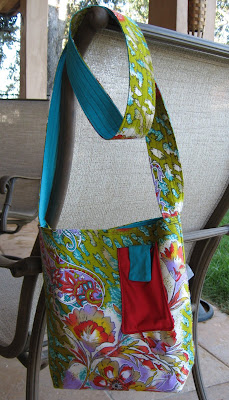 I think my bias tape makers and I have a VERY long and happy future together. Why did I not know about this wonderful tool before? Oh yeah, I've only been sewing for about 4 months! It makes making handles a breeze! I don't have to stand there and fold and press, and fold and press and ick! NO THANK YOU! Now I just pull the little tool along and iron as I go. The hardest thing is getting the fabric threaded into it and that's pretty darn easy! :) I'm a happy girl now!
Posted By Seaexplore at 2:12 PM